Three years after initiating the Eclipse SmartHome project, I am proud to finally announce the general availability of openHAB 2.0, the first openHAB release that is based on Eclipse SmartHome (opens new window)!

This release replaces openHAB 1.8 as the officially recommended runtime, only the openHAB 1 compatible add-ons will be further maintained. They are now available in version 1.9.0 (opens new window) and can be used on existing openHAB 1.8 installations. We have reached far more than 200 add-ons in this package by now and most of them can also be used in conjunction with openHAB 2 (see below).

Back in 2014, our goals for openHAB 2 were the following:

So what have we achieved?

With respect to embedded systems, the evolution of hardware was quicker than us, which made our goal almost obsolete. While in 2014 many users were using a Raspberry Pi 1 which was not ideal for openHAB regarding system performance. Now in 2017 almost everyone has upgraded to more powerful boards like the Raspberry Pi 2/3 or the PINE64, where CPU power is no longer a problem. As a matter of fact, openHAB 2 runs very decently on such boards, even for large installations.

Usability has been addressed on many different levels and version 2.0 only marks the beginning of these efforts, upcoming versions 2.x will continue on this path.

# Setup Through a User Interface

All newly introduced APIs and features are designed in a way that they enable setup and configuration through user interfaces. 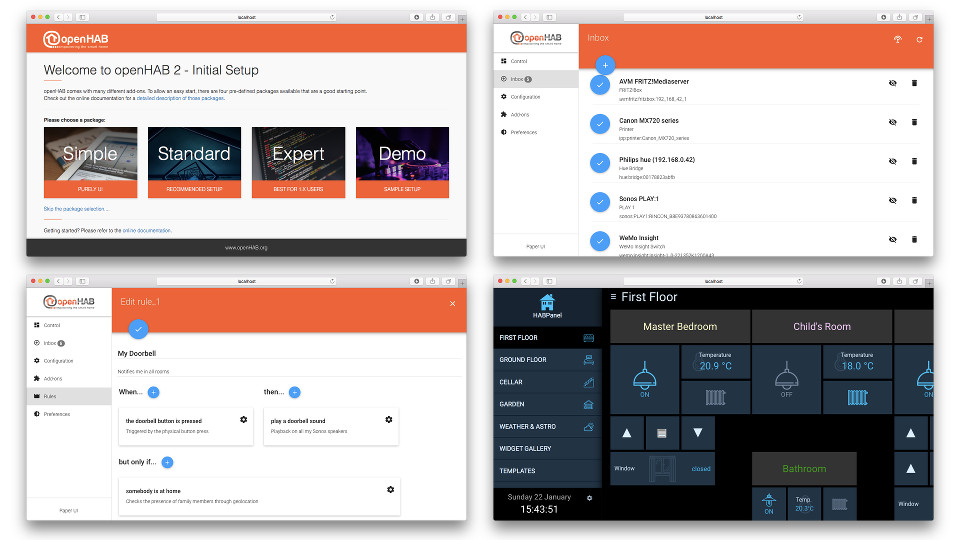 These features together allow for the first time a purely UI-driven setup of openHAB (opens new window) - but it must be said that this only covers a small fraction of the capabilities of openHAB. A core strength of openHAB is its flexibility and the possibility to cover all kinds of special - sometimes really weird - individual use cases. To do so, the textual configuration, as known from openHAB 1, is still required and recommended.

While these new features for beginners have been introduced, a focus has also been to have as little disruption for existing openHAB users as possible and to keep and even extend the textual configuration options. No one is forced to use UIs in future, they should be merely seen as an optional alternative. Most functionality of openHAB 1 has therefore be retained and only minor changes need to be done to the personal configurations and rules. Specifically, most openHAB 1.9 add-ons can be used as openHAB 2 as it has a built-in compatibility layer.

A major obstacle in the past for many users was also the required setup around openHAB, e.g. installing Linux on the Raspberry Pi, configuring users, shares, ssh, etc. This is all much simpler now through openHABian (opens new window) - a self-configuring Raspberry Pi setup, which starts off from a minimal SD card image. It automatically installs Java, openHAB, Samba and more and optionally even KNXd, Homegear, Mosquitto and others. This is definitely the best choice for Raspberry Pi users!

So what is new in general in openHAB 2? Let me give you a rough overview:

openHAB 2 comes with 130 bindings for different devices, technologies or protocols. 57 of them are using the new 2.0 APIs, so that they support discovery and graphical configuration. The rest are bindings from openHAB 1, which are included in the 2.0 distribution.

Some sample products & technologies that are supported by openHAB 2

Many other are currently under development or queued for review, so we can expect to reach 200 bindings by the end of this year. 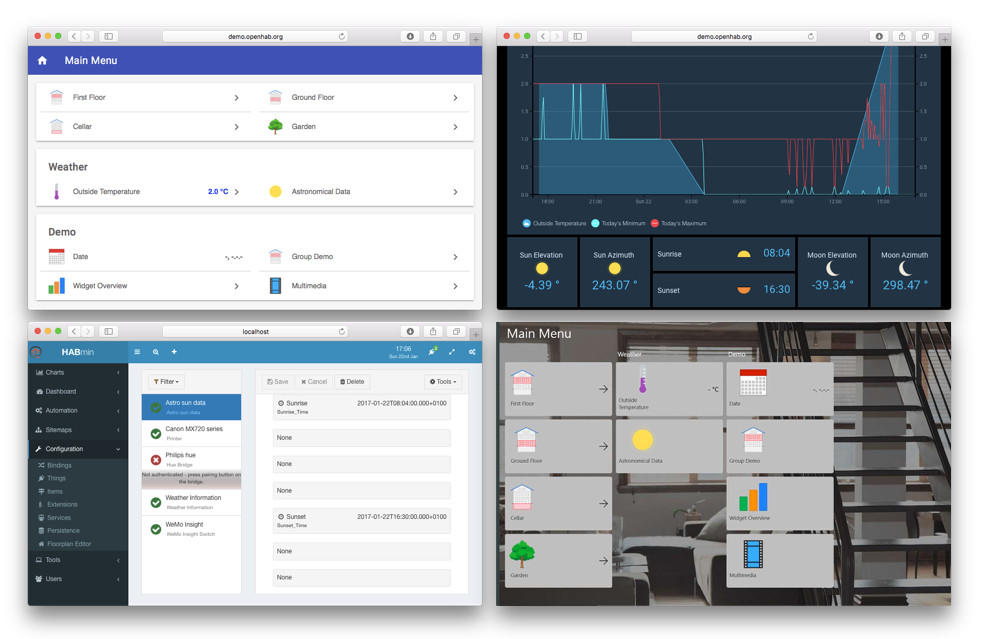 Besides the classic zip archives as well as the APT packages for Linux, there are by now many further alternatives how to get hold of openHAB. (Please note that only openHABian is available from today on, the other types of packaging of the final 2.0 version will follow in the next days):

Overall, openHAB 2.0 is a huge step forward and I would like to thank all the new contributors and maintainers that have joined the project recently, as without them none of this would have been possible. Todays release 2.0 is just a first step and many more things are to be introduced with upcoming 2.x releases - so stay tuned!